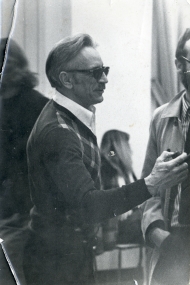 Jean VIVÈS (1921-1999) was a French university champion of 400 meters (flat), coach of international athletes, professor at the École Normale Supérieure d’Éducation Physique for more than twenty years, after being a student, and founder of the Revue EP&S, which he ran for half a century until his death.
Practicing and theoretician, he was one of the first in France to train his students in modern techniques, to give them a taste for research, to bring them to frequent foreign texts. Through the review he directed and the publishing center that merged it, he was an outstanding propagator of ideas, inhabited at once by opening an intellectual and a requirement flawless. He was the author of several books on athletics, gymnastics and sports pedagogy, all of which became reference books.
The Académie Nationale Olympique Française wished to pay tribute to him by instituting an award which illustrates the exemplary qualities which were his and which led him to be one of the main actors of the integration of scientific research in the field of sport.
This initiative was part of the awards and prizes initiated by the Académie Nationale Olympique Française for research, pedagogy and social inclusion. Since 2019, this award is organised by the Éditions EP&S under the scientific aegis of the Société de Biomécanique.

The Jean VIVÈS Award was created in 2005 by the Académie Nationale Olympique Française. Since 2019, this award is jointly organised by The Académie Nationale Olympique Française and the Éditions EP&S. The Jean VIVÈS Award reward, by a 500 € price, the scientific excellence of a young Francophone researcher in the field of sport biomechanics. This prestigious award is delivered annually to a laureate who has demonstrated a high scientific starting point (maximum 5 years post-doctoral thesis defense) and a strong interest in the application of his scientific research to field applications.

The entrance criteria for the Jean VIVÈS Award are as follows:

Applications will be reviewed from the only information provided in the application file on the basis of the following criteria:

The applicants will have to fill in the application file of the Jean VIVÈS Award. It can be downloaded here

Applicants who have had a significant career interruption (e.g. parental leave) during the 6 years following their doctoral thesis defense may produce supporting documents including career break dates and attach them to their file application.

The deadline for receipt is 15 April.

The subject of the email must be “Prix Jean VIVÈS 2022”. An acknowledgment of receipt will be sent to confirm the good reception of each application.

The committee nominates each year the winner of the Jean VIVÈS Award. Besides the president of the French National Olympic Academy, Arnaud RICHARD (or his representative), the committee is composed of ten members:

Three institutional members whose president or authority can appoint the representative of his choice:

Seven researchers appointed by the Board of Directors of the Societé de Biomécanique chaired by Bruno WATIER:

Application due for 15 April and must be send to

Results will announced for 15 June

This Regulation may be amended each year, before December 31st for the following year

Save
Cookies user preferences
We use cookies to ensure you to get the best experience on our website. If you decline the use of cookies, this website may not function as expected.
Accept all
Decline all
Read more
General
General
Gestion des sessions
Accept
Decline
Analytics
Tools used to analyze the data to measure the effectiveness of a website and to understand how it works.
Matomo
Accept
Decline